Pop Stars vs. Entrepreneurs: Why they’re so similar 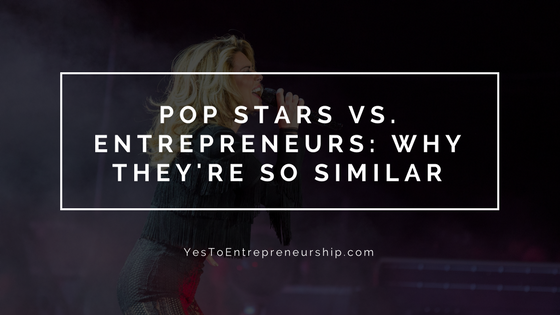 What could entrepreneurs possibly have in common with pop stars?

Well, a few things actually. Hear me out!

Entrepreneurs are creators. We’re passionate about what we do. And no thanks to social media, we often forget that what appears to be an overnight success has really been years in the making.

In one of my recent interviews for the Yes to Entrepreneurship Podcast, a guest commented that “an overnight success has been 10 years in the making.” Like musicians, entrepreneurs also work hard to build a long list of commodities for the general public in the hopes that one of these gems will make it big. Here’s the catch, you don’t know when your “big hit” will come or when you’ll start making that money. What you do know is that you have to put in the work and stay focused.

Like a musician, we (entrepreneurs) plug away aiming to create something that we love in the hopes that others will love it too. Then the payoff comes when people express just how much they love your work.

Now, do you see the similarities between pop stars and entrepreneurs?

This article about Shania Twain is a perfect, relevant, example — even though this happens all the time in the music industry.

That’s a long time for anyone to work on a project especially when someone has been in the spotlight before because people are probably pressuring him/her to release something new. As an entrepreneur, the same can be said with blog posts, social media posts, and online courses. When we pour our hearts into what we do and don’t worry about the numbers (because those will come later) the rewards are great!

We also have to remember, it wasn’t just that artists who created, produced and put that song out there — they had a team. Whether it was one other person or 20, they still had help from someone else in order to get them to where they need to be.